Certain building blocks came early for Kelsey, as he was growing up in Oklahoma. His mother was an art teacher, who encouraged her son’s artistic efforts. While attending school in El Paso, Texas, Kelsey benefitted from another strong presence, that of David Bryson, his agriculture teacher and Future Farmers of American (FFA) leader. After high school graduation, however, Kelsey opted for a pre-dental curriculum and enrolled at the University of Texas at El Paso. While there, he also worked occasionally for orthodontist Dr. Ed Sullivan, who not only utilized Kelsey’s steady hand in the dental lab but also introduced him to sculpture. Sullivan’s art collection made a lasting impression. Kelsey also noticed that a dentist’s challenges of working in the tight spaces of a patient’s mouth, the manual dexterity, and the use of precision instruments were vital skills for sculpting. Yet the time was not right for him to pursue art as a career; the rodeo life enticed him instead. While riding horses was nothing new for Kelsey, hanging onto a bucking bronc was. After two years of college, he dropped out and became a cowboy. Working on various ranches in the Southwest, he mastered roping and riding.

The melding of rodeo work, cowboying, and art didn’t fully gel until Kelsey’s mother talked him into going back to college. While living in Durango, Colorado, he signed up for classes at Fort Lewis College, a small school with a good art department. Once he got into a sculpture class, things came together. Kelsey also met Terah while still in school and the two were married in 1997. In 2000, he accepted an artist in residence gig in Utah, with a new gallery promoting his work. He moved his family, to Park City, where he was befriended by noted sculptor Ed Fraughton, whose work he admired.

In March 2001 Kelsey won the Artists’ Choice Award with his sculpture, Little Brother of War at the C.M. Russell Art Auction. It was his first time to attend the auction and his first juried show. In May 2001 Greg was awarded Best of Show Sculpture with Playing to the Wind at the National Western Art Show & Auction in Ellensburg, Washington and the Artist Roundup Award for the best new artist in attendance. December 2002 brought the First Place Sculpture award at the NFR (National Finals Rodeo) Open Art Show hosted by the Professional Rodeo Cowboy Artists Association in Las Vegas, NV with My Own Buckin’ Business.

In January of 2003, Greg won the Best Sculpture Award at the Night of the Artists in San Antonio, Texas. September of 2003 brought the Silver Medal Award at the Bosque Art Competition in Clifton, TX for Drinkin’ with the Ladies.

Greg keeps his own small herd of longhorns and a few heads of horses. Though he keeps a busy daily work schedule in the studio, he makes time to crawl on the back of a horse to regain a little inspiration and peace of mind. As Greg figures it, one feeds the other and any time in the studio or time with his stock is time well spent. 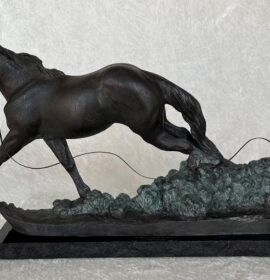 The Horse is out of the Barn