Flynn paints a wide variety of subjects in both oil and watercolor. Her paintings are a representational style that includes landscape, portraits, figure and architectural components. She enjoys painting the West with its colorful landscapes and people. She and her husband travel extensively, and her favorite paintings are from the places they visit. They have also enjoyed collecting art from some of their favorite painters and sculptors.

After earning degrees in Commercial Art and Journalism from SMU, she spent the next dozen years working as a graphic artist and writer. She worked for the Dallas Times Herald as a layout artist, Continental Advertising in Dallas and BBDO in San Francisco as a graphic designer and in production. For seven years she was the Publications Director for the World Affairs Council of Northern California, an educational organization that produced everything from daily lectures and study groups, to weeklong foreign policy conferences and dinners for The President and visiting heads of state. While she did a lot of writing and production, she also designed, illustrated and produced all of their publications.

She retired from the “deadline a day” production and put away her art supplies for years, during which time she and her husband, Rich, moved to Tucson, raised three children and involved themselves in the Community. She has served on boards for Junior League, Angel Charity for Children, the Volunteer Center, Arizona Congressional Award Program, St. Lukes and Tucson Arizona Boys Chorus among others. When her children went to colllege, she returned to art as a painter. Her first show was a collection of plein air paintings done in Greece. Beginning in watercolor, she added oil a few years ago. She has been recognized as Artist of the year for St. Lukes Baile de las Flores. She has had one man shows at Northern Trust, Academy Village Gallery, Tucson Public Library and St. Philips in the Hills. She has exhibited in numerous Mesch Clark Rothschild shows, MO Club and Empire Ranch shows, TPAPs Plein Air shows, Watercolor Guild shows as well as many other juried online shows. Her paintings are in private collections throughout the country. She continues to search for new challenges and is enjoying learning to do new subjects and techniques. 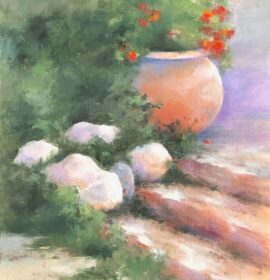