Deborah was born and raised on a cattle and Quarter Horse ranch in northern Idaho. Her father, a World Champion Bronc Rider, supported the family with his winnings. She and her younger brother Jeff grew up on the ranch often alone with their mother. Work on the ranch was shared by all and a life long passion for horses grew from those responsibilities. It was at this time that Deborah sold her first drawings of horses.

Deborah spent her first year of College at Washington State University where she earned a full scholarship. She transferred to Fort Wright College of the Holy Names in Spokane, Washington and received a Bachelor of Fine Arts degree with a Fine Art major following study in Italy. At 19, she sculpted her first commissioned bronze for the city of Spokane, James Glover.

She successfully owned and operated her own business, but despite her success, the horses called. She and her brother loaded their horses and left Washington to compete in the winter rodeo circuit. By the second go-round of Houston and no winnings, Deborah loaded both horses and headed for Phoenix with just enough money to get to a friend’s ranch in Chandler. During this stay, she went to Prescott and met Ernie Phippen who ran a western art foundry. Her world came together. She went back home gathered all of her belongings and returned to Prescott to get a job as a head wrangler in a dude ranch. That year she cast her first bronze and started her art career.

Within four years Deborah was commissioned by Gonzaga University to sculpt a monument of Bing Crosby. The project took her to Queens New York, to Roman Bronze Works, the foundry that cast bronzes by Charlie Russell and Frederick Remington’s bronzes. This was the first of many monuments that she would create. It was during this period Deborah married and had her only child, Fabienne. “My greatest life’s accomplishment” according to Deborah.

In the post-Vietnam era, Deborah won competitions to create veteran memorials including the Inland Northwest Vietnam Veterans Memorial, Montana State Vietnam Veterans Memorial and the Washington State Korean War Memorial.
In 2012 she was selected by the Arizona Historical Advisory Commission to produce a moment of Barry Goldwater, which was dedicated in 2015 in National Statuary Hall in Washington DC.

Living now in southern Arizona with her husband Fred Fellows, Deborah is devoted to creating fresh, original and accomplished sculptures which express her heartfelt feelings for the Western way of life. 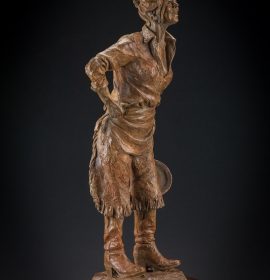 I Love You, but I’m Done Cookin’ 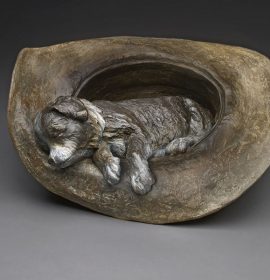 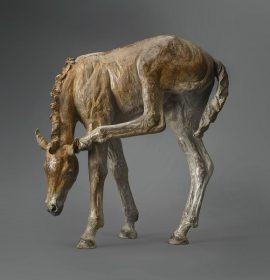 She’s a Little Wet Behind the Ears