Mark Rossi’s continued interest in nature and art emerged at an early age as both of his parents were formally trained in fine arts. His love of the Southwest was deeply affected by his mother’s Apache, Pueblo, and Spanish New Mexican heritage and the traditions she instilled. When he was ten, he began observing his father, prominent Western artist and former Gilcrease Museum of Art director, Paul Rossi, as he worked in his studio and foundry. The artists, conservators, and historians who frequented the museum inspired his artistic pursuit. Mark went on to study at the University of Tulsa and at the University of Arizona in Tucson.

Rossi’s love for wildlife and dedication to his craft is evident in every bronze he creates. He has done numerous bronze installations in both public and private settings, including the Ronald Reagan Library in Simi Valley, the University of Arizona Library, and the Dentsu Corporation in Tokyo. His work is also held in collections in the United States, Canada, Mexico, and Europe. He sculpted 25 desert creatures for the Arizona-Sonora Desert Museum (including javelinas, coyotes, a bobcat, a frog metamorphosis, and a dozen lizards) and eight exotic animal figures for the Reid Park Zoo in Tucson (including elephants, a gibbon, a Bengal tiger, and a polar bear). Among his other public works are three black-tail jackrabbits that are seven times larger than life-size at the Centerpoint Plaza in Tempe and a family of five mountain lions that, when installed, will stand twice life-size at D.C. Ranch in Scottsdale. 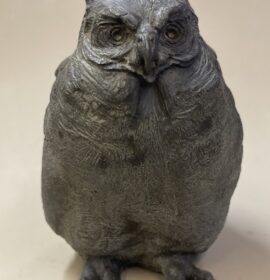 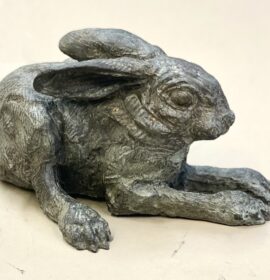