Rosen’s interest in art started early. As a teenager in her family’s home outside Philadelphia, she defied her mother’s nightly command to “stay in bed with the light off” by sitting on her bed, painting by the illumination of a small lamp. The paint set was a gift from her uncle, a weekend artist who did illustrations for Cynthia’s father’s company and who recognized and encouraged his niece’s interest in art. Following high school, her winning portfolio in a national scholarship competition led her to the Boston Museum School.

As it turned out, it was the perfect environment for a self-motivated student who needed freedom to find her own creative voice. There was no requirement to attend classes. Instead, students were evaluated on portfolios submitted at the end of the year. Rosen took advantage of this flexibility to dip a toe into various forms of art, including ceramics, photography, sculpture, printmaking, and jewelry, but realized all she wanted to do was draw. She was also working full time. After volunteering at a drop-in center during her first year of school, Rosen was hired to provide art therapy at a halfway house near Boston. The experience had a significant impact on the development of her art, not through the job itself, but because of the commute to get there. Day after day, she made the 45-minute drive each way to work and back while musing on art. As a result, the visual impressions that filled her mind were of constant movement, of the landscape flowing by. After a year at the halfway house, while still in art school, Rosen obtained a grant to establish a nonprofit called Art To People, Inc. She set up therapeutic and vocational art programs in jails, halfway houses, mental-health institutions, and alternative schools in communities around Boston.

She moved to Vermont, Colorado, and Florida before settling back in rural Vermont, where she lives today. Her art was in a number of galleries and selling well, but when her first child was born in 1981, she made a decision to take a hiatus from painting to raise her family. Later she earned a masters degree in art education and taught art privately and in Vermont schools. Her re-entry into painting was stimulated by creating theater backdrops, which led to commissions for mural work, which inspired her to return to her own art.

Rosen joined the Scottsdale Artists League and began taking part in painting excursions, learning to paint on site by doing it. She experimented with various styles before settling on one that expresses her experience of the natural world. It starts with a canvas she has stained red, underscoring the vitality of life. She uses a palette knife almost exclusively, working quickly and often creating two or three paintings side by side because “we see more than what’s right in front of us. And what we see is always changing, in dramatic or subtle ways.” It’s an element that has remained central to Rosen’s thinking since her days of driving while contemplating art. With plein-air work she may be standing in one spot, but the light, clouds, shadows, leaves, smells, and feelings are constantly in motion. At the same time, countless invisible changes are taking place. No matter what scene is in front of her, Rosen aspires to perceive the underlying aliveness and delight of the natural world and share it through her work.

“If we don’t appreciate the beauty that exists, then we’re losing something. I hope my art can express beauty and bring joy and broaden the imagination for some. It can bridge the gap between total abstraction and imagery that gives a feel for memories and beautiful sights. And that’s important to me.” 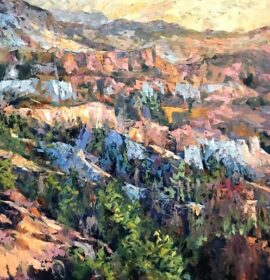