Richard Iams was born in 1950 in West Virginia, near the borders of Ohio and Pennsylvania. He attended Marietta College in southeastern Ohio, intending to major in mathematics until he was exposed to his first art class as a sophomore. Initially, he considered it just another avenue to explore, but exposure to the works of artists such as John Singer Sargent, Sidney Laurence, and Richard Schmid brought forth the desire to learn and master the fundamental disciplines of fine art.

While teaching junior high and community college art courses for five years, Iams wanted to have more time to paint. He moved to Texas where he committed himself to painting full-time. Although trained as a portrait painter, he began using oils and painting Texas landscapes, which launched his name into the art world. In 1979, Iams moved to Tucson, Arizona. It was here that Iams became known as a Master Painter of the Grand Canyon.

Richard traveled from Alaska to Africa, gathering as much painting subject material as possible. It was while in Africa that Iams expanded his landscape material by also painting wildlife. Today, Iams’ home and studio, just east of Tucson, offer him views of the four mountain ranges surrounding the Tucson Valley. 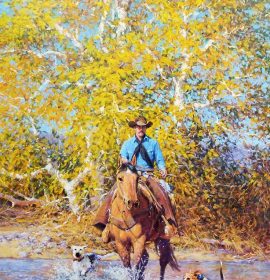