Ann Hanson has been painting the West  as she sees it- for more than 30 years. From Cowboys and Cowgirls to Native Americans, she has a deep love for the Western way of life. She attended two years at a community college as an art major where she focused on graphics and technical illustration. Painting is self-taught and is a never-ending research project. Ann tries to challenge herself with each new painting and learn new techniques she can incorporate into her unique style.

Ann captures the heart and soul of the West in her paintings. She wants you to feel like you have been there and can reach out and grab the moment. Hanson started out working with pencil, moving on to pastels and has worked in oils since 1995. She is noted for her very realistic and highly detailed paintings.

“I love capturing the subtleties of day-to-day life and portraying the small snippets that look into the lives and hearts of my friends and neighbors.”

Ann has been in several national western art shows, including Cowgirl Up! at the Desert Caballeros Museum in Wickenburg, AZ, where she was awarded the Artists Choice Award in 2017; the 2003 Prix de West at the National Cowboy and Western Heritage Museum in Oklahoma City, OK; the Buffalo Bill Art Show in Cody, WY since 1990, when she won the William E. Weiss Purchase award. She won the People’s Choice Award at the 2014 Quick Draw and the Plein Air Magazine Award. Ann was the featured artist at The Cattleman’s Show in Paso Robles, CA in 2003. Ann’s work has hung at the Settlers West American Miniature Show in Tucson, AZ since 2004; Cheyenne Frontier Days Art Show; Heart of the West at the National Cowgirl Museum and Hall of Fame in Fort Worth, TX ; The Mountain Oyster Club Art Show in Tucson, AZ; and The West Select at the Phoenix Art Museum and her work is included in Small Works, Great Wonders Winter Show at the National Cowboy and Western Heritage Museum. Ann’s work was showcased in December, 2015 in a two woman show “On and Off the Wall” with Julie Oriet at the Brinton Museum in Big Horn, Wyoming. She was also included in “A Timeless Legacy” – Women Artists of Glacier National Park at the Hockaday Museum in Kalispell, Montana in August, 2017 and 2019.

In 2009, Ann, along with over 100 artists worldwide of different genres, was invited by George Lucas to create new work inspired by the StarWars saga. Her work entitled “On The Hunt” is included in their book (Oct. 2010) STARWARS Art: Visions. 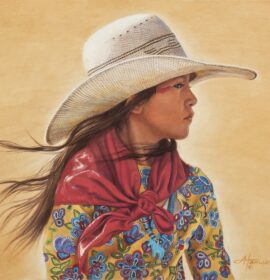 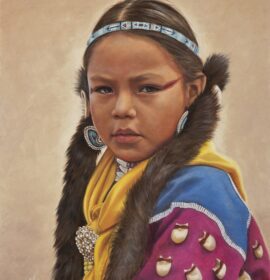 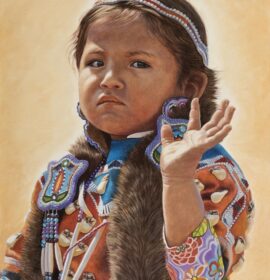