Felicia is a nationally noted, award winning sculptress, specializing in miniature to monumental work. Felicias portraiture and figurative Southwest manner demonstrate the uniqueness of her elegant, recognizable style. Felicia appeared in publications / books titled Women Leaders of Colorado, Sculpture of the Rockies, and many news and magazine articles. Felicia was recognized as one of the top women leaders in Colorado.

Most of her bronzes depict the Native American female, which is expressed in sensuous curves, tension of emotion, with minimal forms. They reflect the spirit and richness of the mystical Southwest. I portray the Native American because they are the original inhabitants of our continent, they should not be forgotten.

In 1995, Felicia was inducted into the National Association of Women Artists in New York City. In 2010, her sculpture The Dancer was featured in the 2010 book Sculptors of the Rockies.

Felicia has been invited to display her work in many juried invitational shows, such as the Gilcrease Art Museum in Tulsa, Oklahoma; the Tucson Museum of Art in Tucson, Arizona; Charles Allis Art Museum in Milwaukee, Wisconsin; the Old West Museum in Cheyenne, Wyoming; the National Arts Club in New York City; Mountain Oyster Club in Tucson, Arizona. She has won numerous awards and has received national acclaim. Her work is displayed in prestigious galleries throughout the United States, and in private and corporate collections throughout the world. 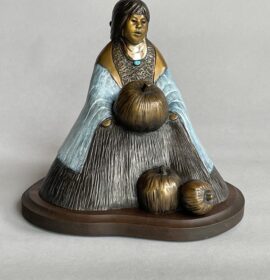