Jackson Boelts, Professor Emeritus, has been an artist, educator, designer for over 40 years and in that time, he has won over 400 awards for his work. He has exhibited work in Moscow, Mexico City, Berlin, Warszawa, Chile, and numerous locations nationally. He is a Professor Emeritus of Art at the University of Arizona, he has been a Visiting Artist at University of Nevada, Las Vegas, and has taught watercolor and drawing in Orvieto, Italy.
Jacksons strengths lie in the visual realm. His mother, Carol Boelts, taught him watercolor when he was 12 years old, and he is now an accomplished painter and designer. He is a master at landscape watercolor and is currently working on large abstract watercolors of Cowboys and Cowgirls on the Border for which he and Joseph Labate received a grant from The University of Arizonas Confluencenter for the creation of this work. He recently had two of his large watercolor paintings from War Zone accepted into a juried national exhibition ARTillery: Modern Art influenced by Weapons of War at the Museum of Contemporary Arts in Mesa, Arizona and they were also in a juried exhibition in Tennessee. His work has appeared in the School of Arts Faculty Exhibition for the 35 years and for the last 10 years the MO club Show in Tucson.
In his landscape watercolors, his goal is to bring the wilderness to those who cannot travel there on their own. Jacksons abstract watercolors search for essence of landscape. In his DNA mono-printshe has started with computer images of landscape ripping digital codes of these pictures and laying these alphabetic images back onto the photographic images and then printing these onto watercolor paper where he creates a third image of a landscape. These images developed into using DNA coding then creating landscapes with images of cotton, maize, and grass.
Jackson is concerned with the education of our environmentthe Human Disconnect series which is a group of large- format watercolors where in a murky landscape, the figures legs do not touch the ground. He has tackled children in war with his War Zone large format watercolors. He has also brought concepts on social issues into his current posters. Border issues, nuclear power, voting rights, and human rights have been elucidated with type and image. 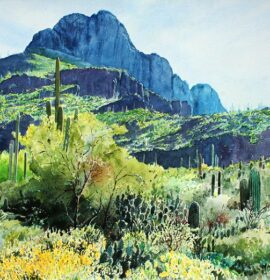 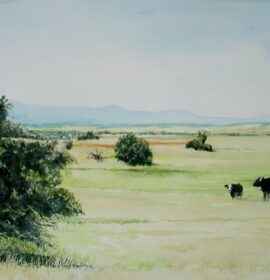