Born in the foothills of San Gabriel Mountains, near Los Angeles, California, Keith Batcheller grew up admiring the images of the Southwest the Old West and the native peoples of America. His early love of art led him to study at the prestigious Art Center College of Design where he earned a B. F. A. with honors. Later selected by Art Center to attend post graduate studies in Connecticut, Keith refined his skills with some of the country’s most acclaimed artists and illustrators including Bob Peak, Mark English, Bernie Fuchs and Bob Heindel.

Keith Began his professional career in New York City as an illustrator, and for the following thirty years he worked for major clients in New York, Chicago and the West Coast creating paintings used in the fields of Advertising, publishing and the movie industry. He has done a significant amount of very recognizable work for Walt Disney Productions including movie posters for Pocahontas, Beauty and the Beast, Hunchback of Notre Dame, Lilo and Stitch and Hercules, just to name a few.

For three decades as a representative of the Society of Illustrators Keith has traveled to many U. S. Air Force bases here and abroad and has done sixteen paintings for the United States Air Force Art Collection. Five of Keith paintings were chosen for a perpetual exhibition in the Pentagon in Washington D. C. He now devotes his time and energy to his true passion: painting western scenes and the variety of people who live in bygone eras, as well as those who live in the contemporary west.

Keith has been honored with many accolades and awards in his career including the GOLD MEDAL for best oil painting at the San Dimas Festival of Western Art. and the PEOPLES CHOICE AWARD at the Cattlemen’s Western Art Show in Paso Robles CA. Keith is also a artist member of the California Art Club. 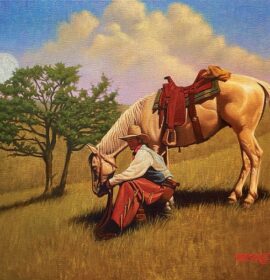