Warren grew up in the shadows of the Rocky Mountains near Salt Lake City, Utah. As a young boy, he discovered that he could draw most things better than his peers and would rather draw than do about anything else. Warren graduated from Brigham Young University with a Bachelor of Fine Arts Degree in 1978. Some of his early odd jobs that helped support his young family and his painting included mechanic, window washer, truck driver, horse wrangler, hay hauler, tail twister, and furrier. He served in the U.S. Army Reserve from 1971 to 1978. He has been a full-time freelance painter for over three decades. He regularly packs his animals with a week’s worth of gear and supplies and heads out for some of his favorite places to paint: the Wind River Mountain Range in Wyoming, the Uinta Mountain Range in Utah, or the many canyons in southern and eastern Utah.

Kimbal is no stranger to adventure. He has also been an avid hiker, climbing to the top of the Grand Teton in Wyoming, hiking to the bottom of the Grand Canyon, and many places in between. He and Gayle love to travel, which provided the opportunity for Kimbal to paint and sketch scenes from around the world.

Warren has participated in multiple juried and invitational shows across the country and has received numerous Best in Show, Award of Excellence, and Purchase awards. 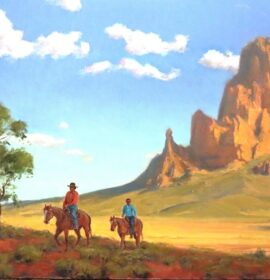