Attending art curriculums at Moravian College, The Baum School of Art, the University of West Florida, and the Art Students League of Denver,
Susiehyer is always looking to expand her repertoire and abilities. I love the challenge of experimenting and pushing myself in new directions artistically, working from sketches, field studies, and photos in the studio. Just as much however, I am blessed to be able to travel in order to study and paint directly from nature. The American southwest landscape is a particular favorite subject for her.

Working as a professional artist since 1976, she has been the recipient of a number of scholarships, grants, and awards, and was recently honored to receive signature membership in both the Oil Painters of America and the American Impressionist Society, and recently was awarded the Best Landscape Award in the Plein Air Salon Competition. A previous national vice president of the Women’s Caucus for Art, in 2020 became a recipient of the prestigious Comenius award from Moravian College.

Susiehyer maintains a home and studio in Evergreen, CO, and travels many times a year to paint en plein air. Her work has been seen as a featured artist in Southwest Art Magazine, Fine Art Connoisseur Magazine, Art of the West Magazine, and was one of the artists whose work was chosen for the celebrated Landscapes of Colorado by Ann Daley of the Denver Art Museum, and Art of the National Parks: Historic Connections, Contemporary Interpretations. She is represented by several Colorado Front Range galleries and participates in numerous plein air events. 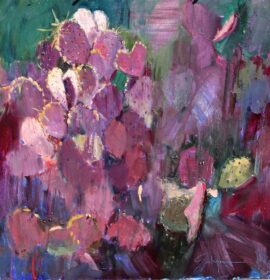