The oldest of eight children, Bill knew intimately the poverty of the depression years. His parents lost their own farm in Oklahoma and worked as laborers to hold the family together. Bill can still remember working alongside his mother in the cotton fields. But the painful memory of lean times is tempered by more happy thoughts, of fishing in the creek, gigging for frogs, and occasionally stealing a melon and eating his heart out right there in the patch.

Self-taught, he has enjoyed a successful career as a full-time professional artist since 1960. An enthusiastic and sincere man, he approaches his subject matter with love, born of a long and close association with the land, first the land of his native Oklahoma and later the greater United States and Canada with their mountains, deserts, and coastlines.

Through a dynamic and often bold technique, he develops an appealing atmosphere in his canvases, which invites the viewer to become an active participant, rather than a passive observer. His palette is a broad one, providing dimensions for the striking contrasts of values of which are predominant in his compositions.

Like many artists, Shaddix has spent hundreds of hours, both in the field and in bookstores and libraries, researching his subjects to retain the authenticity of the old west, cowboys, and ranchers. He specializes in oils but enjoys working in other mediums, including sculpture. His paintings can be found in many museums throughout the country and continues to be acquired by discriminating collectors worldwide. 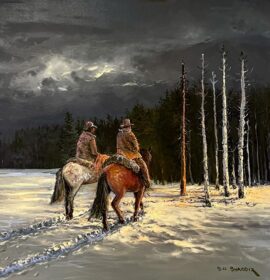