After working in the corporate field of graphic design for over 20yrs., Elizabeth Sage left the corporate office of Texas Instruments as Senior Designer in 2000 to return to what is truly a calling and and passion to create powerful imagery and story on canvas.

Elizabeth Sage grew up in northern California where ranching and horses were an integral part of her life. When she was not riding, she was drawing or painting what she knew best. At the age of 16, she began presenting her first oil works at Quarter Horse and Appaloosa Horse High Point Award Ceremonies marking the end of each show year. Shortly thereafter, her works were accepted in Colorado Springs galleries as well as showcased and sold in new model homes.

In 2008, after spending over 20 years working as a graphic artist both independently and as a Senior Graphic Designer for Texas Instruments, Elizabeth devoted herself full-time to her artwork. Her works continue to be primarily western themed in both oil on linen and graphite pencil. Elizabeths oils are well collected up to the largest formats featuring southwest desert and western themes for private and corporate collections. Whether graphite pencil or oils, her art is considered to be highly detailed, accurate, and very moving to those who experience her work.

Having grown up on a working ranch in Northern California where ranching and showing horses were an integral part of my life, I began drawing ranch imagery since I was old enough to hold a pencil.

Elizabeth’s art is highly detailed, accurate and very moving. Living both in Arizona and Colorado gives her endless inspiration for her expressive artistic style. 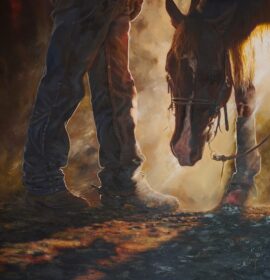