Jerry was born in Georgia, but his family moved to the Texas panhandle when he was very young. From as early as he can remember, he was captivated by art. Even as a child, hed spend hours sketching or studying the art prints that hung in his childhood home.

For a number of years, Jerry made his living as a control systems engineer working for consulting engineering firms. But in the evenings and on weekends, he studied art. He spent his vacations attending art schools in Taos, New Mexico and Scottsdale, Arizona, studying with some of Americas finest artists. He built a small studio at his home where he could hone his drawing skills working from a live model. He knew that art was his passion and in the year 2000, gave up his engineering career and devoted all of his time to his artwork.

Jerry paints in a realistic manner but utilizes loose brushwork and tries to create a strong three-dimensional feel in his work. He strives to capture the feeling of light and the mood or essence of the location.

Jerry has won numerous awards including the First Place award for painting at the Gilcrease Museums Collectors Reserve Show in Tulsa, Oklahoma, the Merit Award for Landscape at the Salon International Show in San Antonio, Texas as well as two Best of Show awards and three Peoples Choice awards at the NatureWorks Art Show in Tulsa, Oklahoma. He was also one of three artists featured in the Into the Field article in the December 2017 issue of Western Art and Architecture magazine. 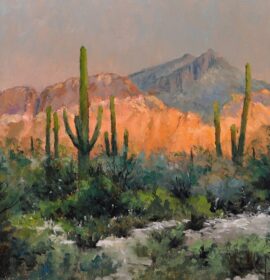