Born in 1944, Francois Koch enjoyed a successful career as a commercial and fine art painter in South Africa. He studied commercial art in the 1960s at the Johannesburg School of Art and worked as an illustrator for a large publishing company until 1970, when he decided to devote himself to fine art, painting landscapes and wildlife. During his South African career, his commissions included works for South African embassies throughout the world and the official residence of the president of South Africa. He participated in many prestigious wildlife art exhibitions, including Sotheby’s Wildlife Auction for the World Wildlife Fund.

Now a proud United States citizen living and working in Texas, Koch paints landscapes almost exclusively. Since 2000, he has had two one-man shows and a two-man show, all sold out before the opening night. He also participates in the Masters of the American West Fine Art Exhibition and Sale, Autry National Center of the American West, Los Angeles; the Western Visions Miniature Show, Prix de West Invitational Art Exhibition and Sale in Oklahoma City; and the Quest for the West Art Show and Sale, Eiteljorg Museum of American Indians and Western Art, Indianapolis, Indiana.

His work has been featured in Art of the West, Southwest Art, and Western Art Collector and is included in the permanent collections of the National Museum of Wildlife Art, Jackson Hole, Wyoming, and the Booth Western Art Museum, Cartersville, Georgia. 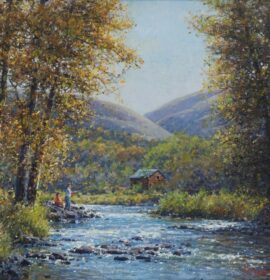