Glen Hopkinson was born in 1946 in Laramie, WY just a few miles from the old Mormon Trail. Glen’s father was the Superintendent and Art Teacher of the local high school in Byron, WY and spent his off-hours building his art career. Glen would recount, “My dad’s studio was a haven of visual pleasure for me. When I was little and wanted to paint, he would get out some of his older brushes and watercolors for me to use. I would literally be underfoot painting my paintings while he painted his. I would say my art training began at the foot of my father from the time I was two or three years old!” After his early years of informal art training, Glen began his more serious art education during high school under the tutelage of his father. He also studied with a famous Saturday Evening Post illustrator, Robert Meyers as well as Donald Putman.

Glen served a mission for the L.D.S Church in Korea for two-and-one-half years in the late 1960s. Part of his mission saw him as editor and illustrator for the monthly mission magazine. Soon after arriving back home, he married his high school sweetheart, Pamela Cozzens. After graduating from B.Y.U with a Bachelor of Fine Arts Degree. Glen, Pam, and their young son Travis moved to Salt Lake City where he worked as an illustrator.

In 1972, Glen received a portrait commission that caused him to move his family to Cody, WY and it was there that Glen’s art career flourished. Painting commissions and sales at art shows and galleries provided the means for Pamela to be at home with their children while Glen was able to devote full-time to painting in his art studio. Blessed with five children, Glen often found himself with his own little ones underfoot, begging for brushes and paint. Glen and Pam moved their family to Mesa, AZ in 1988, yet still spending much of their summers in Wyoming. Their children grew, left home, and soon Glen had a growing generation of grandchildren visiting his studio.

His artwork is in permanent collections of the Montana and Wyoming Historical Society museums, the Whitney Museum of Western Art, and many corporate and private collections throughout the world. 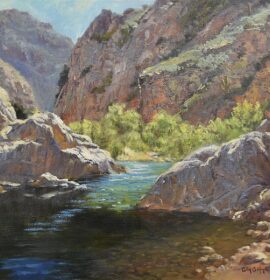 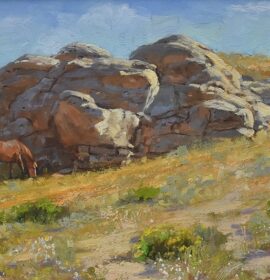 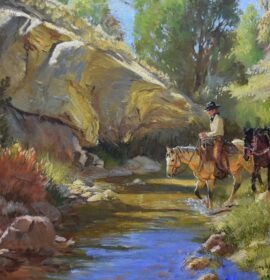