Shawn captures moments in the lives of those who live and work on ranches today. From a young age, she absorbed life around her filled with talk of cattle, weather, the smell of horse sweat and leather, the sound of hooves before dawn, the weariness of long days, and a sense of purpose. Problems presented were solved and lessons learned. So, it had been for generations and remains still. With no memory of a beginning, she continues to record and preserve ranch life as it unfolds, through paint and canvas. God gave her a gift of observation to capture the beauty of fleeting moments that are re-lived by the viewer. They provide a window into a world she reveres and values. Her subjects are real and their stories are true.

Shawn and Dean met while in high school and married after his tour in the army. They settled on her family’s cattle ranch where they raised three children and she continued working in her art. The pencil was her primary medium at that time but oil, watercolor, pastel, and bronze were added to the mix. Although she hopes to explore these areas more, oil painting is her focus today. Learning is a life-long passion and the art world is an infinite resource. The mentoring of several prominent western artists helped her work grow and evolve into a career that has spanned nearly 3 decades. She remains grateful to all but especially Bill Owen, for generously sharing his knowledge in many areas, for Joe Beeler whose continued encouragement and support meant so much and to Robert “Shoofly” Shufelt who opened a door to the world of professional art.

Resource material is gathered on the family’s ranch of Dean, other family members, and cowboys as they work. These captured memories become visual references. They are taken to her studio where they are studied, drawn, re-drawn and finally arranged on canvas. She is closely surrounded by critics for accuracy, yet her goal is to grow in the ability to portray the life few have experienced.

Exhibitions of her work include the Prix de West and Small Works Great Wonders at the Cowboy and Western Heritage Museum in Oklahoma City, OK. She’s participated in Cowgirl Up! Art from the Other Half of the West at the Desert Caballeros Museum in Wickenburg, AZ where she was awarded the “Artist’s Choice Award” in 2007 and the “Governor’s Choice Award” in 2015 and 2016. Shawn was extremely honored to serve with Martin Grelle as Co-Featured Artists at the C.M. Russell Auction and Sale in 2008 in Great Falls, MT. She’s participated in the Night of Artists at the Briscoe Museum in San Antonio, TX and The Cheyenne Art Show in Cheyenne, WY. Another Texas art event she’s been involved in was the Heart of the West at the Cowgirl Hall of Fame in Ft. Worth, TX where her mother’s 1942 Madison Square Garden photo is displayed. It’s been her pleasure to participate in the American Miniatures at Settler’s West Gallery in Tucson, AZ and the Masters in Miniature at the Phippen Art Museum in Prescott, AZ. In 2019 she was invited to one of the founding artists of the Masterworks of the West at the Calgary Stampede in Calgary, Canada. Early in her career, she was awarded the “Phippen Family Award” for a graphite drawing titled “Ranch Weathered” at the 1993 Phippen Western Art Show, in Prescott, AZ. The Mountain Oyster Club in Tucson, AZ presented her with a “Lifetime Honorary Membership” in 2013. In 2019 Shawn was given the “Will Rogers Award for Artist of the Year” by the Academy of Western Artists. Her art has been featured on the cover of publications such as Western Art Collector, American Cowboy, and Western Horseman. She’s been a featured artist in a number of magazines including Southwest Art, Art of the West, Western Art Collector and Western Horseman. 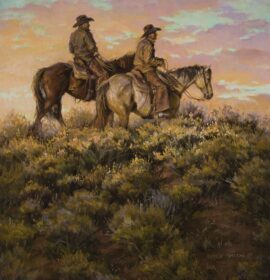