Ginny shares her artful life on a rural patch of ground in central Wyoming with her husband, Duane. In 2001 she began her professional career, although, like so many artists, her roots in art go back to childhood. Growing up with an artist mom who taught her a lot about drawing, at a young age she aspired to be a “painter of paintings”, but it wasn’t until she was almost 40 that she went to college and earned a fine art degree. A few years later she began to pursue painting in a more serious manner. Soft pastels were her medium of choice at the time. Finding herself envious of oil painters for the diversity of the medium, a few years later she launched into oil painting. It’s been 16 years since that move. Her love of oil painting is as evident as ever.

Ginny has continued her education through workshops, mentoring and online instruction from time to time. She’s participated in local, regional and national shows and enjoys teaching workshops locally. Ginny offers individual classes in the field or at her home studio. Ginny’s work is currently shown at Deselms Fine Art in Cheyenne, Rich Haines Gallery in Park City, Utah, the Nicolaysen Art Museum in Casper, Wyoming and at her studio in Glenrock, Wyoming.

Creating paintings that give one the feel of the place; that sense of Ive been there! or I want to be there! is the goal in mind. Painting on location for ideas is one way I go about this. When painting in the studio recapturing the essence or emotion of the scene comes easier when there’s some exploring done first. Spending a few hours outside studying the scene with a paint brush and canvas you remember much more than you do if you just snap a photo on your way by.
Remembering the sounds, temperatures, weather and any events during the painting session brings a deeper dimension to the larger studio paintings, so others can enjoy the scene as much as I did at the time of painting it. 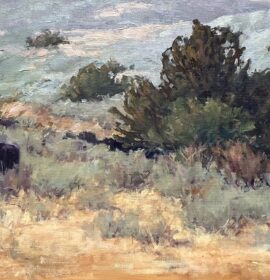 Angus Amidst the Sage