Rachel Brownlee was born in 1993 in Rushville, NE. Inspired by her life on a cattle ranch Rachel started drawing early, focusing on horses and cowboys. Being home educated Rachel was entirely self-taught. She specializes in extreme high realism large format charcoal artwork. She is still young in her career and has already had an extensive list of solo exhibitions.

Rachel Brownlees desire to replicate reality in black and white pencil developed throughout her youth. She was influenced almost solely by two books she owned containing horse drawings; one of them was by C. W. Anderson and the other by Marguerite Henry. Due to the rural location of the ranch Rachel grew up on, she was not exposed to artwork or art education until her twenties. She recalls the first time she realized realistic shapes are not defined by lines, but by light or the lack thereof.

As a self-taught artist, Rachel originally sought to achieve only photo-realistic qualities in her work. Since being exposed to more artwork and styles she is now pursuing a more structured and emotional form of realism where the figure is portrayed realistically, but with more emphasis placed on creating drama within the image in such a way that draws the viewer into the story. She portrays western life in an honest and even discordant manner because while fine western art is typically pastoral and romanticized, her work contains sometimes unattractive, old horses, and gritty details. She believes that traditional western life and the people and animals involved should be portrayed as they lived which can be rough, dirty, and even painfully.

Rachel began selling her work early in her life, with her first piece sold for a dollar when she was nine years old. Since then, she has created many commission pieces every year and began participating in shows and events in 2020. She has won Best of Show at the 2021 Carnegie Arts Center Anniversary Show, 2021 Box Butte Art Society Show, 2021 Nebraskaland Juried Art Show, and received several other awards at those shows. She was selected to participate in the 2021 Nebraska Biennial Art Show in Omaha Nebraska and won the 2021 Lyn Dietrich Award at the Vera Delaney Art Show and Sale.

Rachel lives on a large family cattle ranch in Ashby, Nebraska with her husband and daughter. She lives the life she draws and often uses neighbors as models for her work. Her studies come from her own cattle, horses, and daily life on the ranch. 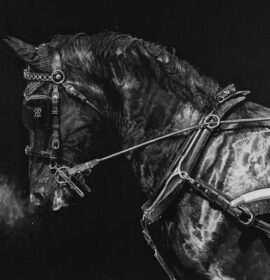