For many years stolen moments was what described the time Herb had available to work on his landscape paintings, during the 33 plus years he worked at UPS. Those days were often 10 plus hours. Sometimes he would be found up around 4:00 A.M. trying to get a little art time in before work.

Fortunately for Herb his delivery area was the Sonoita, Patagonia part of southern Arizona. There he fell in love with the countryside and the people. It was that area that became the material for his paintings. Everywhere he looked his artist heart saw a scene for a new canvas. In 2004 Herb finally retired at age 66. He retreated into his garage studio and went to work painting, only it was a joy, not work! Finally, time to put his beloved southern Arizona on canvas.

During Herb’s work years he was blessed by many of his customers buying his paintings of their area. His art career was also helped along by showing in the Santa Rita Fine Art Gallery where owner Richard Roderick became a close friend and supporter. He also had paintings in the Metamorphosis Gallery in Patagonia and in the Hilltop Gallery in Nogales. After he retired, he was also privileged to have paintings hanging in the Sanders Gallery in Tucson.

Herb owed a special gratefulness to the late George Masek who was the one who introduced him to the Mountain Oyster Show. To be included in this show for so many years was Herb’s biggest thrill! He looked so forward each year to hopefully being accepted.

Herb was a kind, gentle man who was born in Bloomsburg, PA in 1938. His parents moved west when he was a young child. Here he grew to love the area and also learned much about it from his beloved Grandfather who also gave Herb his love of woodworking. Herb always looked at the countryside with the eye of an artist. 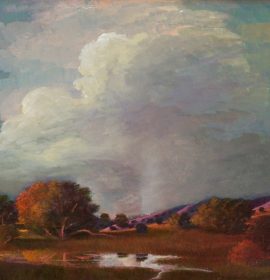