Rebecca Tobey began her career as a professional artist 31 years ago when she began collaborating with her late husband, Gene Tobey. Her stylized animal sculptures in bronze and ceramic reflect her strong connection to the earth. She incorporates additional layers of sgraffito drawings into the sculptures, and cuts holes in the ceramics to create interesting compositions using negative space. The bird and insect life of her rural Santa Fe home fascinates her and she finds herself frequently representing it in her work. “All things are bound together. All things connect. Whatever we do to this world, we do to ourselves and I try to represent that in my work.”

Rebecca discovered her talent for the arts early in life. Growing up in East Tennessee as the daughter of an Oak Ridge scientist father and an artist mother, she was the kid who sang, played the piano and guitar, had the lead in the school play, and then created the neighborhood plays. �I did the best report covers in school,� she says. Her artist mother shaped her visual arts talents without pigeon-holing her in any one area, and in college, she did her degrees in theatre arts and built scenery, sets and created �big� art. Rebecca lives in the country outside Santa Fe, New Mexico where she spends as much time as possible out of doors with her Springer Spaniel, Dexter. With a daughter in Northern England, she travels widely each year to soak up as much imagery as possible for future studio exploration.

Rebecca�s has shown for seven years at Cowgirl Up! Art from the Other Half of the West at the Desert Caballeros Western Museum in Wickenburg, Arizona; in 2019 she was awarded the Museum Purchase award for her ceramic bear � A Friendly Game of Tag,� in 2017 she was awarded �Best of Show� for her ceramic buffalo sculpture �Into the Wind,� and in 2013 she received Best in Three Dimensional for her bronze �Prairie Star.� Her work is in public and private collections worldwide including the University of New Mexico Cancer Center, Albuquerque, NM; The Booth Museum of Western Art, Cartersville, GA; and the Lincoln Center for the Performing Arts, Ft. Collins, CO. You can see her work, which includes bronze and ceramic sculpture, watercolor paintings, jewelry and kiln-fired functional art glass at Beartooth Gallery in Red Lodge, Montana; Exposures International Gallery in Sedona, Arizona; J. Cotter Gallery in Vail, CO; Ventana Fine Art in Santa Fe, New Mexico and Galerie Viecelli in Cannes, France. 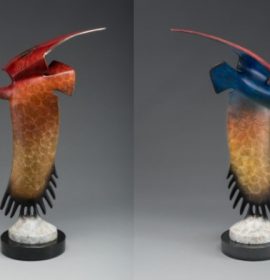 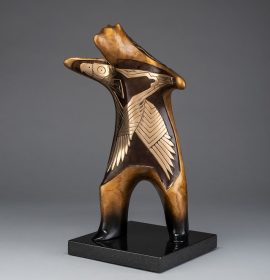