Charles Thomas, b1960, began his art career as a graphic designer in the early 1980s. He spent twelve years as a sought-after illustrator before devoting his energies full time to fine art in 1998. His work has been widely published and has also been exhibited by the Society of Illustrators Annual of American Illustration. Thomas’ work has been recognized by the Oil Painters of America and the American Impressionist Society, where he has been a finalist in their national exhibitions. Charles makes his home in rural Southern Arizona, where he can often be found exploring the trails, backroads, and byways of the West, in search of the next painting. 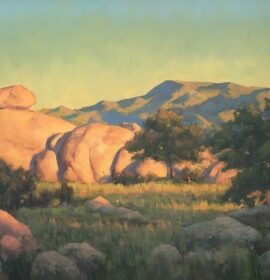