Wei Tai arrived in America in 1991. Since that time, he has successfully found his rightful place among the leading Chinese artists of his generation. He was born in a rural village south of Shanghai, China. His father was a reserved sculptor in their homeland and taught his son both sculpting and painting techniques.

Tai went on to be a graduate from the Shanghai Fine Art Institute. He was also an Assistant Professor of Art and Fashion Design in Shanghai. The artist served as the Chief Designer for the China Silk Corporation for seven years. This allowed him to travel to Western European countries and become exposed to different cultures. These travels gave birth to his longing for new expressions in art. Wei’s experiences with textiles and fabrics are also the source of his great talent for the application of inks and oils to canvas and papers.

His subjects for his paintings were inspired by the excavations of the tomb of China’s first Emperor. Thousands of larger-than-life terra-cotta soldiers and horses were entombed with the Qin Emperor to stand guard over him for all eternity. The artist witnessed the excavations and had visions of combining Chinese ancient art subjects with Western techniques to create his own style of painting. The artist’s series of original oils and lithographs reflect his true talent for expressing his love for his homeland.

Wei’s respect for the history of China also came from several visits to the massive limestone statues of the Buddha at Lung-men (Dragon Gate) and to Dun-Huang, the famous trade route in the remote northwestern corner of China. It was at Dun-Huang that Buddhist pilgrims entered China from India. His paintings of Dun-Huang are fluid, expressionistic depictions of the colorful tales of the Buddha painted on wall frescoes in “The Caves of the Buddha’s.” In the artists own words, “I was searching and learning from the ancients, and the murals are a warehouse of art.”

During his stay in America, Wei’s Eastern subject matter and techniques have been influenced by European and American art traditions, resulting in an exquisite mixture and marriage of both, including Western subjects and Eastern styles. He is multi-talented, working in oil, acrylic, and watercolor, with equal expertise while allowing each of these mediums to influence each other constantly. Wei Tai’s silk paintings are breathtaking. His sculptures and bias beliefs also reflect the marriage of two art traditions. In his own words “The inspiration for art can be found everywhere.”

Wei Tai’s paintings and sculptures are currently held in many prestigious private and public collections. The artist has had one-man shows and group exhibitions in Tokyo, Shanghai, Milan, Cologne, Amsterdam, Scottsdale (Arizona), New Mexico, and Chicago. 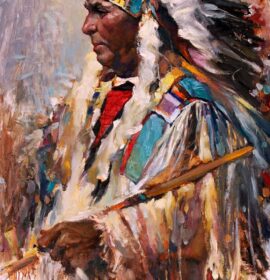