Sherry Blanchard Stuart is an established professional artist that loves the American West; its history and tradition inspires and informs much of her work.

Born in Newport Arkansas, raised in Wichita, Kansas and currently living in the Sonoran Desert of North Scottsdale, Arizona, Stuart has been painting most of her life. She attended the Minneapolis College of Art and Design in Michigan where she earned a BFA degree in painting and graphic arts.

Working in traditional style, Stuart paints with a richness of color that illuminates the intensity of sunlight upon her varied subject matter. Her work is both traditional and representational in style and she paints figurative as well as landscape and still life; but the majority of her work is western and equine subjects. Continually refining and developing her unique style, she seeks to broaden her use of light, values, and color, pushing her work to the next level.

Sherry Blanchard Stuart is listed in Who’s Who in American Art, and has been featured in a wide range of publications: The American Artist, The illustrator, Cowboys and Indians, Southwest Art, Midwest Art, Appaloosa Journal and Wildlife Art. Books include Art of the American West and A Century of Sanctuary: The Art of Zion National Park.

Locally in Arizona, she is a founding member of the Creative Women of Pinnacle Peak and is a member in good standing in Arizona Artists Guild, Phoenix Oil Painters of Arizona and the Sonoran Arts League.

Throughout her career, Sherry Blanchard Stuart has been the recipient of numerous awards in both juried and solo exhibition nationwide and her work can be found in private and corporate collections worldwide. 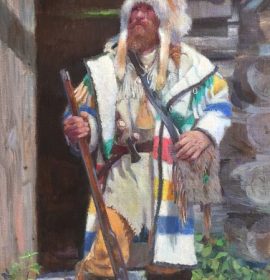