Brenda is a painter, an educator, a public artist, always a student, a lover of life and all things art. In March 2014 she was diagnosed with late-stage ovarian cancer and is presently in her third remission. During this time, she has pushed herself and painted some of her best work. Never underestimate what you can do.

As a painter her work has been included in both national and local juried shows: Oil Painters of America, American Women Artists, National Oil and Acrylic Painters Society, Arts for the Parks, Mountain Oyster Show , the Empire 100 and the Arizona Biennial. Her paintings have also been featured in posters for the Arizona Chamber Music Festival for twenty-five years.

As a commissioned public artist Brenda learned she could do anything with a creative open mind. Several of her projects include: Grijalva Park; Hohokam Lizards (Bridge Pier, Wrightstown and Tanque Verde), featuring three six foot long sculptured lizards; Tucson Historic Street Plaques, embedded in sidewalks throughout downtown Tucson; and as the commissioned artist for the Luis Gutierrez Bridge, aka the Cushing Street Bridge (ends near the Mercado in Menlo Park), and named by Roads and Bridges magazine as one of America’s Top Ten Bridges in America.

As a dedicated high school educator, Semanick was a Top Ten Finalist for Arizona Teacher of the Year Award, received the prestigious Lumie Award for Best Art Educator of the Year from the Tucson Pima Arts Council, and is an inductee to the Sunnyside School District Hall of Fame.

Collections include the Tucson Museum of Art, the University of Arizona, the City of Tucson, the City of Phoenix, Sky Harbor Airport, Tucson Airport Authority, Northwest Medical Center, Sonoma State College and the National Bank of Arizona. Workshops include Daniel Keys, Qiang Huang, Nancy Guzik, Matt Smith, Josh Been, Phil Starke and Elizabeth Robbins. She has attended the national Plein Air Convention Expo (PACE) for the last three years. She holds memberships with OPA, AWA (with distinction) and NOAPS. 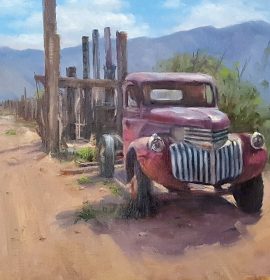