With work hanging at the White House and in permanent, private and Museum collections, throughout the world, John Seerey-Lester has become one of the most renowned of today’s wildlife and historic artists. John has gained a reputation over the years for producing images with a narrative and which are both mysterious and mystical. Now he has taken this skill to produce a remarkable series of paintings depicting historic hunts of safari legends.

He has received the Lifetime Achievement Award from the Society of Animal Artists, the People’s Choice two years in a row at the National Museum of Wildlife Arts Western Visions Show 2017, 2018, and was given the Simon Combes Award for Conservation. He also received the Award of Excellence and the Patricia Allan Bott Award for Mara River Horse and White on White by Society of Animal Artist, the Award of Excellence from the Susan K. Black Foundation., and the Artist of the Year by Sporting Classics.

John has been Master or Featured Artist for nearly every major wildlife show both in the US and the UK, over the past 42 years. His works have been exhibited in most major museums such as the Gilcrease Museum, National Museum of Wildlife Art, Bennington center for the Arts, Nature in Art at the Sonora Desert Museum, Buffalo Bill Art Show and Sale, Cody, WY, Western Visions, National Museum of Wildlife Art, Wyoming, Society of Animal Artist Show, The Briscoe Art Museum, Texas, The Audubon Tradition, Cincinnati Museum Center, Ohio, Artists for Conservation, Canada, Birds In Art, Leigh Yawkey Woodson Museum, Wisconsin, The James Museum of Western and Wildlife Art, Florida, Safari Club International, Dallas Safari Club, and Houston Safari Club 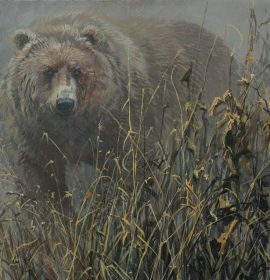