As a child, Toby would run out of his house first thing each morning and then spend as much time as possible in the outdoors of a small town in the exact center of Montana. He and his father would bike, hike, hunt, and kayak, and after he’d filled his soul with its daily dose of nature, making sure that every surface of his body was covered in dirt and bugs, he would come in the house and sit down with his mother, who would teach him about creativity, color, form, and artistic expression. When she taught him how to paint and draw, he would get frustrated that he couldn’t make things look just right like she could. She would tell him, “These are 40-year-old artist’s hands. You have little 5-year-old hands. When you have 40-year-old artist’s hands, you’ll be able to do make it look just right, too.”

Toby’s hands are not yet 40 years old, but he has never stopped working to train his hands to make his artwork look just right. He has sought out expert artists with whom he has studied to help him hone his craft, and delights in passing that knowledge on to his students. Meanwhile, he has never strayed from his love of the outdoors, and celebrates nature by drawing and painting bison, elk, moose, and any other animal that dares show its face. Spending his whole life residing near the route taken by the Lewis & Clark Expedition has also instilled in him an appreciation for the American West, and he enjoys creating art that celebrates the lives of the people of that period.

Tobias’ drive to create paintings worthy of the beauty of nature has caused him to look more closely at objects. Trees, skies, antlers, grass, fur, and eyelashes must be studied and reflected upon in order to capture the right shade of purple or green in its light or shadow. This contemplation of his subjects and their elements has resulted in a deeper appreciation of the beauty of life and the people in it. 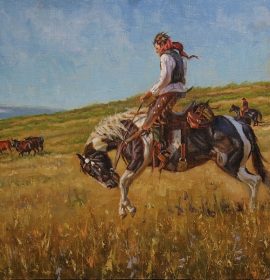