For Alfredo Rodríguez, painting was as much a part of his childhood development as learning to walk and speak. Some of his earliest memories are of illustrating classroom assignments and painting portraits of family members with one of his earliest gifts, a set of watercolors from his mother at the age of six. Born and raised in México in a family of nine children, Alfredo used his talent to supplement his familys income needs.

Now living in California and winning top awards from several of the most prestigious organizations. Rodríguez work is also included in the books Western Painting Today by Royal B. Hassick and Contemporary Western Artist by Peggy and Harold Samuels. Alfredo also has been featured in magazines such as Art of the West, Informart, Western Horseman , and International Fine Art Collector.

His works have also been used to illustrate Bobbie Kalmans textbooks: Nations of the Plains , Nations of the Southwest, Native Homes, Life in a Plains Camp, and The Life of the Navajo.

Alfredo has exhibited at several important invitational art shows around the country, including the Masters of the American West at the Autry Museum in Los Angeles, California. Alfredo also displays his work at the Trailside Galleries in Jackson Wyoming and Scottsdale Arizona, Settlers West Galleries in Tucson, Arizona and Hueys Fine Art, in Santa Fe New Mexico.

The Favell Museum of Western Art in Klamath Falls, Oregon honored Alfredo giving him the 1991 Artist of the Year  award, and his work is in the museums permanent collection. The Leanin Tree Museum in Boulder, Colorado and the Booth Museum in Georgia have several of Alfredos paintings in their collection as well.

Rodríguez works are also in the private collections of Mr. and Mrs. Gene Autry, Miss Connie Stevens, Mrs. Pilar Wayne, and Mr. and Mrs. Bob Eubanks. A professional artist since 1968, Alfredo Rodríguez is enjoying international response by private and corporate art collectors, as well as wide critical acclaim. He is internationally recognized for his outstanding paintings of the American West. His rich and vivid images of mountains, deserts, and Indian villages are admired wherever they are displayed, but it is his portrayal of the inhabitants of the land that provides the focal point of his work.

As he paints he captures the dignity of the human spirit elevated by the majestic beauty of their surroundings. He has come a long way from such a humble beginning, yet the critics believe that his masterful treatment of the American West is largely responsible for his success and demonstrates even greater potential for the future. 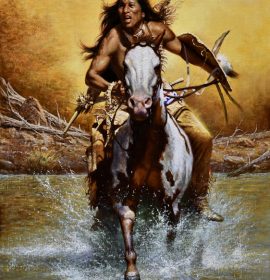