Doug Oliver 1942- 2019
Doug was born in Dayton, Ohio relocating with his family to California as a young boy. The grandeur of the western landscape had a profound influence on him. He began painting at age twelve and soon developed his own style that is prevalent today. He won his first professional art award at 19.

Doug entered the prestigious Chouinard Art Institute, earning his Bachelor of Fine Arts degree in 1968. Soon after, he was awarded a Master of Fine Arts degree from the University of Redlands, California. His early career was spent as an art educator in Lancaster, CA teaching in secondary and local community college art departments. He began full time studio work in 1981. He and his wife, Barbara, relocated to Northern Arizona in 1998.

His artwork has been featured in Art of the West and Southwest Art magazines. His signature style of landscape images with soaring skies and panoramic vistas are well known throughout the contemporary art world.

Eric Slayton
After twenty seven successful years in marketing communications, advertising, trade show design and commercial illustration Eric ventured out into the world of fine art.
When I reached the point in my career where I was more manager/art director, and found myself hiring artists to do what I had always enjoyed doing, I knew it was time to return to the beginning, to my passion, to creating art. states Eric.

Fortunately he had the opportunity of working extensively with two well known California artists, Neil Boyle and Ron McKee both of whom where also illustrators before becoming painters. Eric had already developed a strong skill for quick and accurate drawing and a keen sense of color and design, which is so crucial in the advertising industry. What Boyle and McKee provided was the knowledge needed for translating his experience as an illustrator into fine art. The importance of capturing the essences of the subject as quickly as possible and develop good value and color harmonies. These artists encouraged him to pursue his own style and artistic vision. Always strive for excellence and except nothing but the best from each effort.

Eric and wife Marlene currently live in the central Arizona mountains around Prescott. Just a couple hours drive to the Grand Canyon where they spend a few relaxing days every December with renowned artist Doug Oliver and his wife Barbara. For us it is a place of renewal, an inverted cathedral, if you will, where you can sit quietly with God.

-Winner of the John and Ann Taylor Scholarship Kalispell Montana-Studied at the Ashland Academy of Art and the prestigious Grand Central Academy, in New York 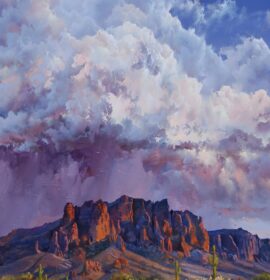