Born and raised in the very small town in Nebraska, Karens talent for art was encouraged from a very early age. Upon graduation from the Omaha School of Commercial Art at the age of 19, the Hallmark Card Company promptly hired her as a greeting card illustrator where she continued to work in illustration for Hallmark and other companies for nearly 20 years before venturing into the fine art market. She has also created collector plate series for the Hamilton Group and the Bradford Exchange, and illustrations and designs for childrens products for Roth International.

While currently living in Santa Fe, NM, Karens body of her work was inspired while living in Montana. She lived and worked in an idyllic mountain side setting on the Flathead Indian Reservation where she called home for many years. This gave her an abundant source of potential Native American models and the incredible beauty of the surrounding awe-inspiring landscape. She loves to paint children because of their innocence, their genuine, honest, and spontaneous response to life. Her focus has been to portray the domestic life of the early and pre-reservation-era of the Plains and Plateau Indian where she discovered the fascinating and exquisite bead and quill work that was used to decorate their clothing, everyday items, and other regalia. It gave Karen the opportunity to honor their artistic expression while she portrayed them in her works of art. For accuracys sake and in order to convey realism she has spent countless hours researching, collecting reference and museum books on early Native American life and visiting museums to photograph their exhibits.

I have chosen portrayals which depict special or sacred moments in time, where the subject is in perfect harmony with nature. I create images that inspire strength, wisdom, tenderness, and innocence. They are visions that inspire me, give me pleasure, and renew my spirit. I endeavor to make my experiences stand still in time, hopeful that viewers will be taken to that same time and place and will be inspired to look for and savor those sacred moments in their own personal lives.

Karen works in oil in a realistic Old Master style that requires many delicate layers of paint and much patience. She is known for dramatic use of light and sensitive portrayals of her subjects. She is the honored recipient of six Peoples Choice Awards from several premier Western art exhibitions including:

2016 Mountain Oyster Club Art Show, Wieghorst Award, BEST IN SHOW
2013 International Guild of Realism, BEST OF THE WEST award
The Coeur d` Alene Galleries Miniatures by the Lake 2009 show
The C.M. Russell Museum and Auction
The Spirit of the Great Plains Invitational at the Museum of Nebraska Art
The Stampede Western Invitational in Greeley, CO. 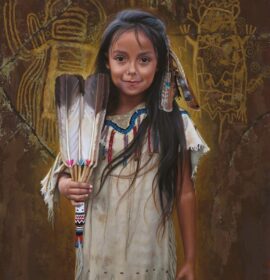