Rock Newcomb is a nationally acclaimed fine artist living in Arizona. Though Rock paints a wide variety of Western subjects – including Native American, cowboy, landscape, and wildlife, he may be best known for his remarkable still-life paintings featuring historic and prehistoric artifacts. Many of these works include subjects the audience may never encounter in person due to their rarity and inaccessibility.

Currently painting primarily with acrylics, Rock utilizes techniques previously acquired while using oils and watercolors. He paints layer upon layer of thin glazes to achieve a glow and depth seldom seen in this medium.

Newcomb’s career in art has spanned 4 decades. He attained advanced art degrees and also taught art in the public sector for many years prior to becoming a successful full-time fine artist. His artistic accomplishments have been acknowledged worldwide through awards, juried and invitational exhibitions, and numerous published articles. His professional affiliations include signature member status in the Society of Animal Artists and International Society of Acrylic Painters.

Rock has shown at numerous galleries and institutions, including The Smithsonian Institute, Laguna Beach Museum of Art, and the National Cowboy and Western Heritage Museum. He participated in a PBS Television series, “The Artists Workshop” featuring his painting and drawing techniques. Rock has been featured in numerous magazines, including Southwest Art, Western Art Collector, The Artists Magazine, International Artist and Art of the West. 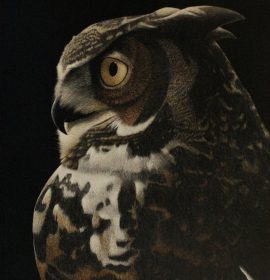