Morton began cowboying on different ranches as a teen and ultimately became wagon boss on the historic Bell Ranch in New Mexico. The life of cowboying makes Gary more than familiar with his subjects. I dont just paint for myself, but to honor the working cowboy. Garys paintings are realistic, accurate and his attention to detail allows him to be honest to himself and the people he paints. Gary has spent over 30 years at the easel depicting contemporary cowboy life. Both his art and subjects are authentic. Over the years he has shown his paintings in many shows, galleries, and museums throughout the country. Gary continues to create authentic paintings of the contemporary working cowboy. He has enjoyed many opportunities to create special commission works for collectors. Gary has a body of work that reflects a life dedicated to perfecting his God given talent and portraying the cowboy.

Morton has served on many boards throughout his career. He is one of the founding directors of the Working Ranch Cowboys Association and served as Vice-President and President. He remains a WRCA Director and chairman of rules and sanctioning. He has served four Governors of New Mexico in various appointments including Chairman of the New Mexico Arts Commission, Director Department of Cultural Affairs and Equestrian Facility Design Task Force.

By 2002 Gary had spent 25 years as a full-time artist when the love of the life brought him back to ranching, taking a position as manager for the CR Ranch near Las Vegas, New Mexico. Then in 2008 he was awarded the grazing lease on the Valles Caldera National Preserve where he and a cowboy crew cared for 2000 yearlings through the summer.

In 2009 he acquired the summer grazing lease on the Mescalero Apache Reservation in southern New Mexico where he and a crew cared for 4700 yearlings. In 2011 Gary has come full circle and returned to the Bell Division of Silver Spur Ranches and the Mesteno Camp country west of the Canadian River. Being able to bring both worlds together once again has proved inspirational.

Gary was honored as the 2015 recipient of the Rounders Award, a lifetime achievement award given in New Mexico, for his artistic contributions to the West. The Rounders Award honors those who live, promote, and articulate the Western way of life. 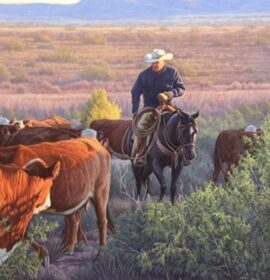