Born in Massachusetts and raised as an “Air Force brat,” Chuck rode with his two younger sisters in the back seat of the family station wagon on cross-country trips to his Dad’s new duty stations, treasuring their stops at cafes, gas stations, tourist-trap shops, and classic motels. With each new set of neighborhood kids, he was the young “director” who (inspired by TV and movie Westerns) passed out cap guns and other props for cowboy and Indian games.

“I sort of fell into being an artist later in life. God gave me some talent, so I suppose I could always draw, but aside from the doodles I did to amuse the kids at school, I didn’t paint or draw. As a teenager, and still showing no interest in art, I played guitar in a garage band, listened to the Beach Boys, Beatles, and other music, and I sometimes skipped school to observe life firsthand. After high school, I joined the Navy to explore even more of the world.”

Four years after serving in the Navy, he went home to Austin, Texas, where his parents had retired. He attended drafting school which let him explore some hand skills, and a part-time job at an insurance company led him to his future wife, Carol. After he finished drafting school, they moved to Colorado. As they began to travel together, his ongoing wanderlust infected Carol; They’ve logged more than a million miles in cars, investigating the corners of the United States and Canada, and more miles camping across Europe on trains.

After a few years as a draftsman in Denver, Chuck enrolled at Metropolitan State College (now University). In his fifth year, desperate to graduate and needing another quick elective, he took a drawing course. His professor, Craig Marshall Smith said, “My grades range from one to ten. And nobody makes tens!” I said to myself, “I’ll show him. And I actually did make some tens.” After the challenges and inspirations of Smith’s class, he changed my major to fine art. Finally graduated, he was skeptical of the reliability of a career as a fine artist, so he opted for more schooling and the potential of a reliable job. On his way to graduating with honors in graphic design from the Art Institute of Colorado, he learned more about concept and design, and how to think outside the box as he worked. Then, in four years of “real jobs” as a commercial designer in Denver and Los Angeles, he found that coming up with ideas and applying design to them was fun, but the rest of the business was not. In 1988, determined to make it as a fine artist, Chuck quit his job and began exploring subjects and styles. However, getting his work into galleries was another matter. One day during this seeking process, he ran across a great photo of a cowboy from the knees down. That was it. Several galleries accepted his work and they began to sell it!

“Continuing road trips across America invigorated my romance with the road: wide-open spaces, blue-sky days, the intense light after a summer thunderstorm, rusty windmills, gas pumps, pickups, and Coke machines, neon signs, worn out toys, and weather-beaten murals and barns. Along the back roads of the West and on Route 66, I linger in small towns or at fairs and rodeos to capture those images in my camera and in my mind. I see that these distinctively American artifacts have textures induced by weathering and years of hard use that are exciting to reproduce. Besides recreating the details of cowboys, boots, and spurs, my painting hand keeps itching to work on all these other things that make me smile. I have found the rest of my direction and passion. You might call it American Pop Art. I also appreciate other artists, whose work I constantly study. I also get to connect with people, in person at gallery and museum shows, and through my paintings (when I’m not there) in galleries across the West. This means that Carol and I still travel a lot—to deliver paintings to galleries and clients at some of the grandest places on earth.” 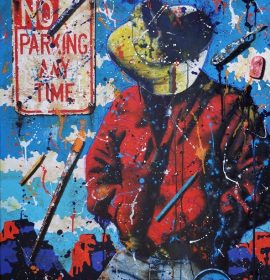