Krystii Melaine paints quiet moments of thoughtfulness and emotion, and life’s brief moments of pure joy and explosive action. Her stories are subtle but very deep if you look beyond the surface. Poetic rather than narrative, Krystii’s paintings often contain symbolic details that hint at the full story. There is room for interpretation and discovery, room to develop a deeper understanding and appreciation over time. Krystii’s paintings speak quietly but profoundly to those who pause to listen.

Born in Victoria, Australia, Krystii Melaine announced at age four that she would be an artist, won her first art competition at seven, and was selling paintings by age fourteen. Following University studies in drawing and graphic design, Krystii enjoyed a successful career as a fashion designer specializing in bridal and evening gowns. Returning to her lifelong passion for painting, Krystii undertook five years of atelier study in traditional tonal realism. Visiting the US, Krystii found inspiration in the people and wildlife of the American West. In 2010, she and her husband moved to Spokane, Washington, nearer to her favorite subjects. Using oil paint in a realistic, painterly style, Krystii portrays the people and animals who shaped the West in the past and who continue its traditions today. Through intimate portraits and wider narratives, she tells their stories and brings each individual to life on her canvas. 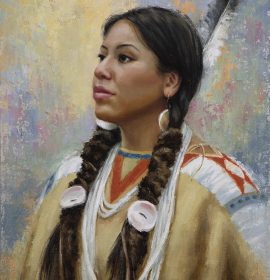