She has been a Wildlife Artist for 19 years, and shows her work internationally, as far away as Russia, Istanbul, Tasmania, and has Galleries in Fuquay-Varina, NC and Jackson Hole WY, as well as Southern Ontario. She exhibits in large Wildlife Shows in Charleston, South Carolina (SEWE) (14 years), and Buckhorn, Ontario (Buckhorn Fine Arts Festival) (14years). McNeil can be found painting in her Eastern Wildlife Studio, in Brampton, ON.

To McNeil, a painting has to capture the drama and life of the subject. She has learned so much about the natural world since studying wildlife. She has discovered an abundance of wildlife in her own backyard: Deer, Blue Herons, Night Herons, Cardinals, Blue Jays, Red Tailed Hawks, and Owls are just some of them. 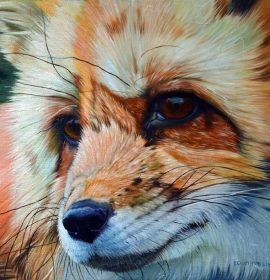