Michelle Valborg Kondos is an award-winning artist living in both Borrego Springs, in the remote California desert, and New Orleans, LA. She grew up in the Boston area and traveled widely in Europe during childhood, having a Swedish mother and a Greek father. She comes from a lineage of artists on the Swedish side of her family, most notably her great uncle, Sven Vickstrom, whose works are represented in the National Museum in Stockholm.

She attended Bennington College in Vermont, as well as Regents College of Art in London, where she studied art history and painting under Owen Wood, the renowned English artist, and illustrator. She continued her studies in portraiture, landscape, and life painting with Latvian painter Auseklis Ozols at the New Orleans Academy of Fine Art. And then began a period of extensive plein air painting in Venice, Italy over the following five years.

Michelle has exhibited widely in galleries and exhibitions across the U.S. She was commissioned to paint the official city hall portraits of two former New Orleans Mayors- Marc Morial and Ernest “Dutch” Morial as well as many other political figures, judges, CEO’s, university deans and other prominent individuals throughout the U.S.

While living in Durango, Colorado she became fascinated with the beauty and the history and spirit of the American West. Her love of horses had already begun in childhood as an avid rider. Today the main areas of focus in her painting are western and wildlife works as well as plein air landscapes.

In 2015 she won Best Oil In Show at the Western Spirit Art Show in Cheyenne, Wyoming and in 2015 received 2nd place in the international Bold Brush Competition. She was recently elected for artist membership in the Society of Animal Artists as well as the California Arts Club. And in 2016 and 2017 her paintings were selected for the Mountain Oyster Club Western Art Show- most recently receiving the purchase prize by the club for their permanent collection. In October of 2017, several of her wildlife paintings were featured in Western Art Collector Magazine.

In 2017 Michelle was commissioned to paint the official portrait of New Orleans Mayor Mitch Landrieu for the collection of the City of New Orleans. This will be her second Mayoral portrait for the city. The portrait will be unveiled during the New Orleans Tricentennial Celebration in the spring of 2018. Recently, two of her wildlife paintings were selected by the Society of Animal Artists to be shown at the Nature in Art Museum in Gloucester, England and at the 57th Annual Society of Animal Artists Exhibition, Art and the Animal, at the Hiram Blauvelt Art Museum in Orodell, NJ in the fall of 2017. The show will continue on tour throughout the year to several museums in the U.S. She most recently has had a painting chosen to be included in the prestigious C.M. Russell Museum Annual Exhibition and Auction Event taking place in Great Falls, MT in March of 2018.

Her work is represented in public and private collections throughout the U.S. and Europe. 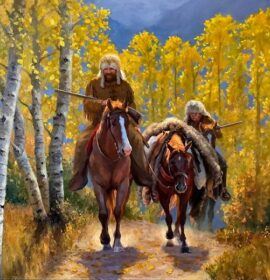 In the Golden Season