Janis Graves is a native of Washington State. After high school she moved to the eastern town of Walla Walla, Washington and began to raise her family. The raising of her children became her focus but even in that she found art never far away. Seeing through young eyes gave her new perspective. After two decades of growth with her family, Janis has been free to devote to her art. Pastels have become a special love. She has worked in both acrylic and oil, and still enjoys both mediums, but has found nothing more immediate or vibrant as pastels. In the development of her skills, Janis has taken classes at the Seattle Academy of Fine Arts/ The Gage. She has had the pleasure of attending workshops with a wealth of well know artists such as Ned Mueller, Richard McKinley, Bill Hosner, Jennifer Deihl, Desmond O�Hagan, Jill Soukup, Tony Alain and Susan Oglvie.

Janis is a member of American Women Artists, Women Painters of Washington and a signature member of the Northwest Pastel Society, Oil Painters of America, PSGNA and PAWA. Her works have been seen in several galleries such as the American Art Co, Tacoma, Scott Milo Gallery, Anacortes, Clymer Museum of Art, Ellensburg and Wild Horse Gallery, Bellingham. 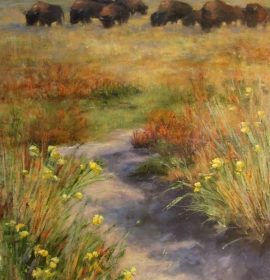