Born in Toledo, Ohio, the first sculptures of Al Glann were fanciful creations on the family farm in central Ohio, more for the entertainment of this youngest child than, for artistic expression. Formal art training began in college where he graduated from the Columbus College of Art & Design with a 1973 BFA in Graphic Design and Illustration. Although he worked as a commercial designer and illustrator, Glann’s passion was in the creation of dimensional constructs and painting, composite relief, casting, wire sculpture, wood, and metal. Inspired by painters like El Greco, Miro and Mondrian and sculptors like Henry Moore, Naum Gabo, John Battenburg, and Alexander Calder, he was able to incorporate this passion into his work as an Associate Professor, teaching 3-D design and 3-D Illustration classes at his Alma Mater.

In 1996, Glann relocated to Phoenix, AZ. In 2001 he received a Masters of Education at Northern Arizona University. Balancing the life of a graphic design instructor at the Art Institute of Phoenix, he forged a career as a sculptor in steel and bronze beginning in 1990. His work has been related to that of Frank Lloyd Wright and Frank Gehry in line and movement with influences from the art deco movement. In 2008 Al began work on his “Horse Series” which he continues today.

Creating the horses is a different process than other works. The models are designed organically from steel using minimal pieces that are representative of the massive bodies. The completed steel maquette is then molded to prepare for the bronzing process, using the steel originals as the masters in the final fabrication.

Named Instructor of the Year in 2009, Al Glann decided it was time to focus all his energy on his sculpture and painting. At the end of 2010 Glann “retired” from the Art Institute of Phoenix and moved his sculpture and painting studio to the Metal Arts Village in Tucson. Since that time, he has shown his work throughout the U.S. and has work in England, Canada, and Italy. 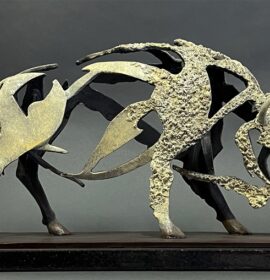 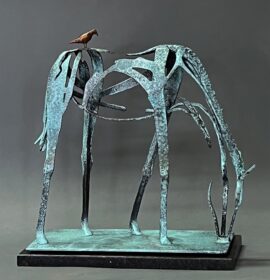 Grazing with a Friend