Sheri Farabaugh began painting after careers in tax accounting and biochemistry; just about as far from art as you can get. But love of drawing and painting as a child and teen stayed with me until time permitted, and from the moment she took her first class as an early retiree, she was forever committed to being the best artist she could be. It is a bit of magic that with nothing but a squeeze of paint and some good brushes, you can tell a story. The hope of pulling that off is what brings her to the studio almost every day. Finding beauty in the details has led her to a realistic style, being drawn to bold values and intricate patterns. She paints many subjects, but a fascination with the reflections and patterns of moving water led her to paint rivers, lakes, ponds, and puddles of the West and Midwest. 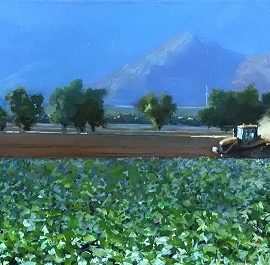