I grew up on my familys apple orchard in Beechworth, NE Victoria, Australia. After finishing school I thought the logical path would be to complete a Biology Degree with a major in plant science. I took a gap year on an agricultural exchange program to Canada, where I met my future husband Chris, whom I would eventually join on his familys farm in central Queensland. I began painting after we took on our own 20,000 acre property in south-west Queensland in 2003. Prior to this I spent many years pursuing a variety of career paths including high school teaching and financial planning, but it wasn’t until I picked up a paint brush that I finally found what I was put here to do. I also needed a creative outlet to counterbalance the struggles of rural life.
I found that painting didnt come naturally: developing technical proficiency was something I had to pursue with dogged determination. I enjoy the challenge of creating an image that looks realistic but when the viewer gets closer they see a plethora of colours and textures that are created when mixed on the canvas rather than the palette.
My creative intent remains simple. The world we live in today is full of fear and anger. Rather than add to it, I want to create works which balance that out. I want people to look at my paintings and feel up-lifted; to feel a sense of joy. I also want people viewing my paintings to feel connected to rural life.
After 20 years in the Queensland outback, in 2015, we moved back to North East Victoria to settle on 1350 acres in the Greta Valley (Ned Kelly country), farming beef cattle.
The subject of draught horses has also caught my eye. These animals have become my muse because they are emblematic of rural life. I paint them to reflect on the values of hard work, and steady, calm strength, which ultimately draught horses symbolise for me. 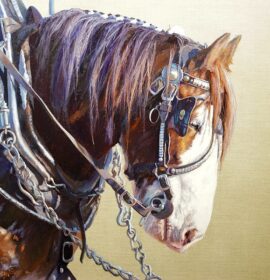