Dudley lives on a Texas working ranch that has been in her family for over 135 years and recognized by the state of Texas as a Texas Century Ranch. Her paintings depict the memories and subjects of her heritage from the wide, open spaces she rode with her dad, their livestock and horses to her mothers country gardens. She loves to portray the cowboy way of life and the Texas landscape.

Howard Terpning has remarked on her work, Its quite evident that she has very strong feelings about her subject. She shows a great understanding of landscape and her love of it. Her use of color is sensitive, and she has a fine sense of color. One of her greatest honors was to be one of two artists to be selected by Terpning out of his workshop students for a special exhibit at the Cowboy Artists of America Museum.

The United States Equestrian Foundation has commissioned paintings to be used as their Christmas cards. Major collectors include BNSF Railways, Ronald McDonald House in Phoenix, Australian Shepherd Club of America, US Equestrian Foundation and many others. Her work has been featured on the covers of magazines such as Houston Livestock Show and Rodeo, Longhorn Driver, Country Lifestyle, and Rocky Mountain Rider. She has also been featured in Art of the West, Western Art Collector, and Southwest Art magazines.

Major awards include Best of Show, Popular Choice, and the Jones Award from the Bosque Art Center, Best of Show and Gold Award in Acrylics from San Dimas Festival if Fine Art judged by Alfredo Rodriguez, and Best of the West Landscape Award and Peoples Choice Awards at the Best of the West Show. 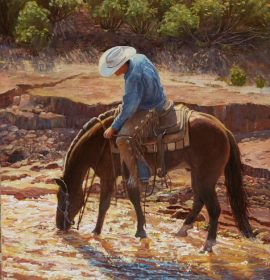