An avid collector of American Indian art and artifacts, Patricia Dobson paints cultural objects of the Southwest, Plains
Indians and wildlife. Dobson works both from photos she has taken and from the actual arranged objects. Her oil
paintings are characterized by unique shadow effects and surface effects that suggest old, time-worn artifacts.
She studied at Foothill College in California and worked as an electrocardiograph technician in California before
turning to life as a professional artist in 1975. With her focus on Native American themes, she moved to Arizona with
her two boys in 1985. 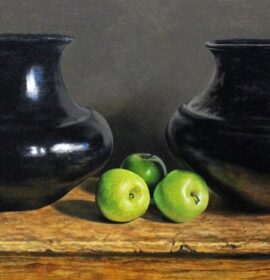