Antonio Di Donato was born in Casanova di Carinola, Italy. He grew up watching classic western movies and “spaghetti westerns” (proud that they were filmed in Italy). Antonio also enjoyed reading the adventures of Tex Willer, a very popular Italian western comic book hero. When he was younger, playing Cowboys and Indians left him with a scar on his knee from a younger brothers homemade arrow and another scar on his forehead from the same brothers Indian spear. Antonio also has always loved horses. When his youngest brother was born, he walked to the store and bought a little toy horse and carriage for him. In his teens his mother allowed him to paint a large picture of horses running through water on one of the walls in their home. His boyhood dream was to live with Indians and ride with the cowboys.

Antonio was attracted to art as a child, drawing charcoal pictures of the courtyard at his grandfathers home. Antonios talent was recognized early. He was scheduled to enter an art academy but his education was interrupted by the death of his father. Several years later, Antonio enrolled at the Institute of Art at Il Castello in Milan, Italy. He also studied and trained with several well-known artists in Milan.

Antonios interest in the cultures and history of the American West is a favorite hobby. He has tried to incorporate into his life the ideals of respect and admiration for nature, hard work, to never give up, and to be proud of ones talent. Ultimately, Antonio hopes his art will reflect his love and appreciation for the nature, animals, and peoples of the American West.

In 1991 Antonio immigrated to the United States where he lives his dream. Not only has Antonio had the opportunity to ride with cowboys but he also has the privilege to call many of them friends. He has received encouragement and support from notable artists such as John Hughes, David Mann, Jim Norton, and William Whitaker. Antonios work has been sold and exhibited in Utah, Wyoming, Canada, and at the annual Western Art Association Show & Auction in Ellensburg, Washington. Antonio was also the featured artist in the August 2004 edition of Western Horseman magazine. Antonio has had several pieces, including portraits, commissioned by many art collectors and he has years of experience in commercial art as well. 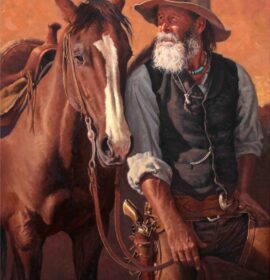 Bart, Buck, and a Six Shooter