Steve Devenyns began painting as a sideline when an automobile accident laid him up and forced him to drop out of pre-veterinary classes at Colorado State University. Already an accomplished musician and saddle maker, Devenyns never returned to school, deciding instead to develop his art. With valuable coaching from respected Western artists, a good deal of determination and years of hard work, Steve Devenyns has become recognized as one of America’s finest Western artists.

Devenyns has been featured in a number of major magazines, including Southwest Art, Inform Art, U.S. Art, Equine Images and Art of the West. In 1991 he received the Museum Purchase Award at Cheyenne Frontier Days’ Governor’s Invitational Art Show. Well known for his oil painting, Devenyns also has special talent as a pencil artist, capturing a quality in his subjects that few others can.

An experienced and accomplished cowboy, Devenyns has “lived” the Western life, riding broncs, driving cattle, branding calves, packing into the high country and entertaining with his guitar and fiddle. His considerable artistic talent and his experiences make him uniquely qualified to paint the West and its traditional way of life. 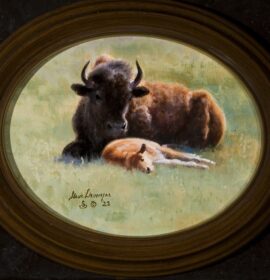 Patience on the Prairie