“The plein air experience always presents a battle. It starts off nice enough, but then…The sun is beating down on you, so an umbrella is necessary. This requires ingenuity to rig as the wind inevitably kicks up. Wind will flop your canvas on it’s face, while tying you in knots with the umbrella, and dog leash, in my case. Insects… need I say more?”
At the early age of five, Sally literally “pedaled” (on tricycle) her small pencil sketches to the neighborhood in rural Minkler, California. Her affinity for art smoldered through early years and began to blossom during a year’s study in Florence, Italy. Completing a B.A.and M.A. at Fresno State University, she took a teaching position in Australia. The fields of study during college of geography and art found ground for the next few years. Several years after returning to the U.S. she found the combination of teaching at the local community college and teaching students on independent study allowed time to take a few more classes in watercolor and later oils.

Sally has earned many awards and special honors including acceptance in California Watercolor Association National show; a 40-piece one- woman show at Fresno City Hall; participating in two select shows honoring Fresno history; published in The Vernacular Architechture of Fresno County; and acknowledged as a contributor for the Scenic Highway Proposal for Highway 180 in eastern Fresno County. In 2009 pieces were accepted with Taos Gallery, International Show, Taos, NM. In 2016 her first New Mexico solo show featured 17 vibrant oils of New Mexico. 2016 also saw the purchase of a major piece, Sangre de Cristo Chapel, through the Art in Public Places program of New Mexico. In 2018 Sally had a major retrospective solo show of 70 pieces at Hanford Art Center.
She has produced six small booklets of art featuring the surrounding beauty in Fresno County: Recipes Along the Blossom Trail – a collection of sketches plus recipes; Savoring Minkler – full-color of Sally’s paintings and a light history. Truchas Tales, parts 1 and 2, are out of print, stories and paintings of life on the High Road to Taos. Seasonal Colors Along the High Road is also out of print. Two newest books are self-named, Sally Delap-John, one a larger version to go with the 2018 solo show.
Sally has been a featured artist in the following magazines: New Mexico, Southwest Art , Western Art Collector. 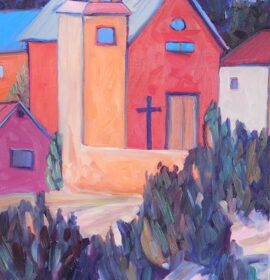