A love of Old West history and particularly her family’s lives in the 1800s in Texas and then Arizona inspires most of Cottrell’s paintings. She enjoys painting anything to do with the West, past, and present, but especially love illustrating the tales of pioneering adventures her family experienced.

Cottrell studied art at the University of Arizona and Scottsdale Artists School but believes that her real painting education began with her tutorship under James Reynolds in 1983. A career highlight was a joint show with Reynolds in 2005 at the Claggett/Rey Gallery in Vail, Colorado, and the Desert Caballeros Museum’s purchase of one of her paintings for their permanent collection. 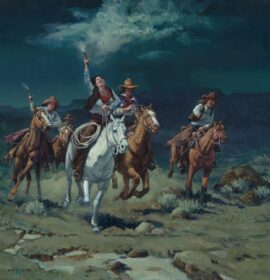