A fifth-generation Montanan whose great-great-grandfather Nelson Story” headed the first cattle drive from Texas to Montana, Bob Burkhart’s artwork is inspired by his life-long ranching background coupled with his experience in the rodeo arena, both as a participant and as a pro-official.

Bob’s sculptures stem from varied life experiences, which lend a unique authenticity to each individual piece. Although Bob’s bronzes range in subject matter, he specializes in genuine western and wildlife images, with his rodeo sculptures highly sought after. His sculptures have received many awards, some of which include a silver medal and a gold medal at the PRCAA International Art Show in Las Vegas; the Cattleman’s Award, Best of Show and Best Sculpture Award at the Omak Stampede. He has done commission pieces for Justin Boots, Dodge Rodeo, the National Intercollegiate Rodeo Association, US Smokeless Tobacco and the Safari Club International. Bob has also done the Red Lion Trophy for the Pendleton Round-Up Rodeo that includes the Steer Roping Trophy, the Barrel Racing Trophy, and the Saddle Bronc Trophy. Bob also donates his sculptures to a multitude of worthy benefits.

Bob is a Pro Rodeo Cowboys Association Gold Card member and a Canadian Pro Rodeo Association member. In 1972, Bob was the Montana Amateur Rodeo Association Saddle Bronc champion. Bob was drafted into the Army and ultimately sent to Europe, where he competed in the European Rodeo Association. Most of the rodeos were held in Germany where he won the All-Around as well as the Saddle Bronc championships in 1975. After he was discharged, he competed in the Pro Rodeo Cowboys Association, mostly in Saddle Bronc riding,but also did some Team Roping and Steer Wrestling.
He is currently one of the top PRCA judging officials that goes to rodeos all over the nation. He has been chosen by the contestants and coaches to judge the College National Finals Rodeo seven times as well as has worked on the Wrangler National Finals Rodeo Riding Event Staff for the past twenty-five plus years. He is one of the founders and charter member of the Pro Rodeo Cowboy Artists Association. Bob currently serves as a trustee for the Montana Cowboy Hall of Fame and is a member of the Safari Club International and the Southwest Chapter of the Safari Club International.

Bob established his commercial foundry, Burkhart Bronze, 35 years ago in 1977. The foundry is located on the family ranch in a log building that his Grandfather had built in the 1930s. Bob casts his own sculptures as well as for several other artists. 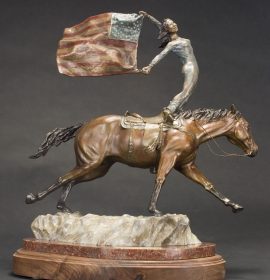