Rob has been living in Tucson for nearly 50 years, first arriving in 1965, and leaving briefly for college in the late 60s and early 70s. Along the way, he spent much of his time outdoors,
hiking and backpacking, learning the desert, and developing an attachment to the Sonoran Desert.

Nearly 25 years ago, Rob and his late wife, Nancy, began to seriously collect art. Many of the paintings are of the American Southwest, and many from local Tucson and Arizona artists.
Somewhere in that time frame, Rob began to paint on his own. That turned into a passionate pursuit, but limited by a career in finance, and the need to be a husband and father. Now
retired, Rob paints full time.

Robs art education is equal parts self-taught, and from workshops and classes led by professional artists. Two of the artists who have been instrumental in Robs development are Phil Starke and Matt Smith. He specializes in oil painting, primarily landscapes, but currently devotes some of his time to the study of charcoal portraiture and figurative drawing. 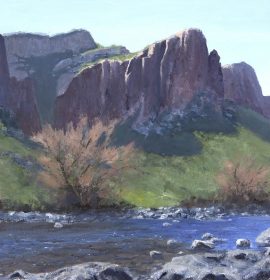