Boyers work has been displayed in the “Oil Painters of America” show many times and won their Animals Award of Excellence at the 2011 National Show. He has been featured on the cover of American Artist December 2004 and the cover of International Artist December 2006.
Arts for the Parks honored Richard Boyer with the Grand Canyon Purchase Award in 2005, a purchase award in 2004 from the Grand Teton Natural History Association and the Marine Art Award in both 2003 and 2006. He received the Judge’s Choice Award in the Arts for the Parks competition for both the 2000 and 2001 competitions and two of his paintings were among the top 100 selected in the 1999 competition. He has also received the “Art Times Award” from the Salmagundi Club in New York and the Stobart Foundation Award at the Twenty-third Annual Mystic International. In 2008 Richard became a member of the American Society of Marine Artists and then moved up to a signature member in April 2010.

Boyer began painting at an early age, first showing his work while still attending high school in Williamsville, New York. He graduated from the University of Utah in 1981 after five years of study under the portrait and figurative painting “Alvin Gittins”. Gittins’ ability to render the figure so expertly intrigues and influences him to this day. 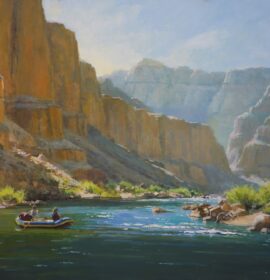 Day on the River 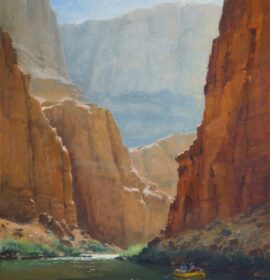